LBBTM2 is a health supplement made for both children and adults alike, to improve immune health and natural body defenses against digestive issues and general ailments.

In our bodies, we play host to various microorganisms especially in our gut which help to modulate and regulate our immune system to better our defenses against various forms of bacteria and/or viruses.

LBBTM2 is a probiotic formula that helps to maintain bacteria balance in our digestive ecosystem, giving our entire system a boost, and supports our natural defenses.

The World’s most researched friendly bacteria

LBBTM2 contains 2 of the world’s most documented friendly bacteria: BB-12 and LGG. Each bacteria strain had been tested in numerous clinical studies from newborn pre-term infants to elderly with no reported side effects.

LBBTM2 contains 18 billion viable probiotic cells in each sachet, which renders it the highest dose available in the market. These microorganisms are kept alive by sealing them in aluminium pouches filled with nitrogen. This will ensure that the bacteria can offer their maximal health benefits when consumed.

It is the best-studied and most extensively documented probiotic lactic-acid bacteria strain in the world.

Some of its benefits include stabilizing the human intestinal microflora and hastening the removal of pathogenic microorganisms, treating gastrointestinal disorders and bacterial and viral infections, and strengthening the immune system.

There have also been preliminary observations on the antitumor effects of LGG in the colon.

The active bacteria strain BB-12TM (Bifidobacterium animalis subsp. lactis) contained in LBBTM2 is one of the world’s most documented friendly bacteria.

It has been used as a food ingredient and health supplement worldwide since 1985 without reported side effects. Tested in several clinical studies involving newborn pre-term infants to elderly, there were no side effects reported from its introduction to the subjects’ immune systems. 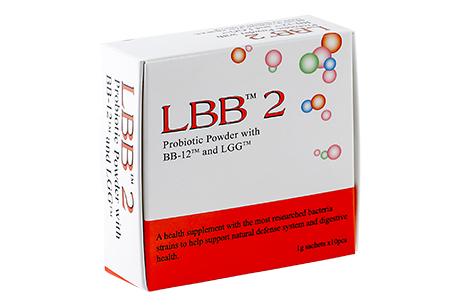 LBBTM2 powder may be consumed direct or added to room temperature food or fluids.

Consume LBBTM2 powder for at least 1 week after completing the course of antibiotics or after a diarrhoeal event to restore digestive health as well as to build up the natural defense system.